I was in my downtown office in Santa Cruz and my client was in the waiting room when the earthquake hit. I’ve been through a lot of earthquakes, but this time it was like being on a bucking horse. I had to hang on the doorjamb just to keep from falling down. My client was in another doorway in another room and we yelled back and forth to each other as the earthquake was going on. Absolutely everything in shelves or on the wall went flying through the air.

Then there were a lot of people running and yelling in the streets and someone who had been in the Acapulco restaurant a few blocks away said the ceiling fell in and that people were seriously injured on Pacific Avenue.

I didn’t know where my daughter was exactly, as she was carpooling home from high school. So I wanted to get to her ASAP. When I went outside to my car, the whole sky was full of what looked like smoke, but I found out later it was dust from the buildings that had collapsed. I got in my car and had to get across the San Lorenzo River to get to Capitola. The bridge had a big crack in it, probably about six inches wide all the way across the bridge and the cars were stopped. I felt frantic to get to my daughter so I just passed the stopped cars and drove over the crack. Fortunately my car made it without getting one of the tires stuck in the opening. 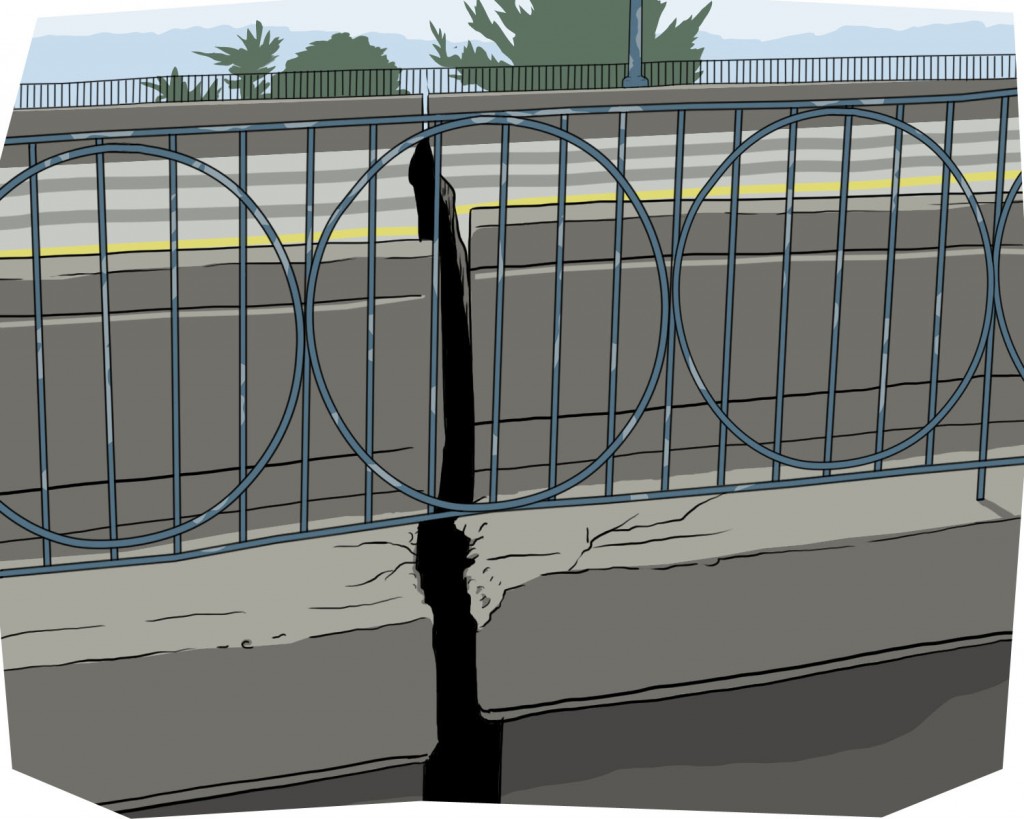 The streets were jammed, but I kept taking back roads and worked my way to the carpool pick up spot. I was a bit panicked when I found that my daughter wasn’t where she was supposed to be, but I drove home, nearby, and she had walked home. She was standing out in the street with the neighbors, who were all staying outside because of the aftershocks.

My daughter and I drove to a nearby park to use the pay phone. There were a number of young men playing basketball as if it was a regular day, so it was peaceful there.

I couldn’t get through by telephone, so about an hour later I came back to Santa Cruz to check on my mother and grandmother. By then I had heard on the radio which bridge was open. The air in Santa Cruz smelled like natural gas. When I came to my mother’s house, the door was wide open and they weren’t there, so I was afraid one of them was injured but I didn’t know where to look or what to do so I went back home. There was so much chaos, damage and injury around that it was really frightening not to know how your friends and family had been affected. It would have been much less scary with cell phones. But some of the landlines worked and later messages got through and we all found out that everyone in the family was okay.

That night we slept out in the back yard because of the aftershocks. We listened a lot to the local KSCO and KGO radio and heard about what was going on through the newscasts and talk radio.

There was no gas or electricity for a few days. All the schools and businesses were closed, so it was kind of a holiday atmosphere, though a gloomy one, like when JFK was shot, because everything stopped and people were sociable and not in a hurry. Of course, that was not the case for those who had any major damage or injury and for emergency workers.

When I think back now, I see that, during that whole experience, what was really important to me was getting in communication with people that I cared about.