At the time of the quake I was 45 years old, teaching math at the Town School in San Francisco. I was making copies of an assignment in a small room on the second floor of my school in the Pacific Heights district of the city. I knew instantly it was a quake and took a few steps to stand in the doorway. I remember I braced myself with both arms. I looked across the hallway and made eye contact with another teacher who was standing in her doorway right across from me. Together we bounced around for 20-30 seconds. After the motion stopped I got out of the building quickly. It wasn’t damaged, but there was plenty of damage in the buildings I could see down in the Marina District. Several fires were already burning, creating plumes of smoke. A former student drove by where I was standing on Jackson and Scott Street. He stopped and told me that the Marina District was a real disaster zone.

I got worried about my girlfriend. I knew she had left school before the quake and was heading to the East Bay. I got in my car and drove to her house in Noe Valley, about 4 miles south. She wasn’t there. Electricity and phone service was out. I remember all the debris that had fallen off buildings and all the people in the street. We all exchanged information.

After a couple of hours my girlfriend came home. I was so relieved. She had a scary story: she was in downtown SF during the quake. She then tried to get on the Bay Bridge and the police actually let her on. She drove a bit and then thought better of it and turned around. She wouldn’t have been able to make it due to the section of the upper deck that had crashed onto the lower deck. Moments later, an unsuspecting driver died instantly as he flew off the upper deck due to the missing section of the upper deck. By the way, this crash was caught on tape and replayed on TV again and again. To me it is a gruesome reminder of that day and whenever it is shown, as it often is even to this day, I turn it off or look somewhere else because I know someone died right then.

The following day I drove to Santa Cruz. My mother, sister, and niece were fine. My mother was thankful that a neighbor had some over to her house after the quake and turned off her gas. It was a neighbor with whom she had been feuding (she didn’t like the way he parked his RV in his driveway). After this demonstration of concern for her welfare, she never spoke ill of him again.

It’s the kind of day you never forget – right up there with the day Kennedy was shot or when the Challenger Space Shuttle went down.

I was on the Bay Bridge, traveling with my mother, my youngest brother and my son, who turned 6 months old that day. My other brother Kent, his wife, two young sons and their nanny (from Switzerland), had all just arrived from North Carolina. They had moved several years earlier from the Bay Area and were very excited to be making a return visit. They were staying at a small hotel/B&B just off of Fell Street. We were meeting them for dinner, and of course, to watch The Game. My brother Kraig was very concerned about not missing even a minute of the game, and to that end, brought a pocket sized transistor radio with him. The plan was to get some food that we could take back to the B&B so the little boys (age 2 & 4) could play and we could watch the game. He brought the radio to listen to every minute of the game, even when they went to get us food!

We had a little bit of a late start. We were on the upper deck of the Bay Bridge, just past the cantilever section. Very suddenly, we felt a very strong hit, like someone hit us from behind. But no one had. We screamed. Our car jumped into the next lane. In just a few seconds the day, the week, everything had changed. We immediately tried to change from the baseball game on the radio to KGO to get the latest news. First we thought a tanker had hit a pylon under the bridge, then we looked for a “mushroom cloud”. Had someone bombed us? No radio reception. Everything went blank. We kept driving – thank God my brother was driving – all of the digital signs on the bridge and all clocks were off. We couldn’t see any lights. We kept creeping along and made our way to Fell Street. An old African American man was walking up the street and my brother yelled out to him, “Was that an earthquake?” He yelled back “What the F_ _ _ do you think?!” We began to see buildings that were crumbled, frantic people crying, still no lights, and fear began to set in.

We made our way to the B&B. We found my brother and family outside. We hugged, held on, and cried. We all talked at once. What a way to return to San Francisco. Their nanny from Switzerland had never been to SF. She was a mess. When it was safe to enter the B&B we did and tried to regroup. My brothers took off on foot to try and get some dinner. They found a pizza place open. They had real brick ovens with coals! Didn’t need to rely on electricity. They waited for about 1 1/2 hours in line and finally brought back food. My son, Thomas, was still drinking baby formula. Of course, our intent was not to spend the night when we set out for the evening, so we didn’t have enough formula with us. My brothers found a corner market later that evening, the whole stores contents on the floor, and rummaged through it and found baby formula for me!

We spent the night with my brother. All of the bridges were closed and we were afraid to move. Blankets were brought to us from the manager, and he was very kind to us. He checked several times to make sure we were all doing well and to see if we needed anything.

That small transistor radio became our lifeline. All of the adults were sitting in a circle around it, like a campfire. If not for the game, my brother would never have brought the radio! It was many hours into the night before electricity was restored and we could watch this event unfold. My young nephews didn’t understand any of it. They were in awe of all of the fire trucks, sirens, and fires they could see from the windows. They sat by the windows until they fell asleep counting fire trucks. Everyone sees things so differently.

We finally crept home the next day by way of the Golden Gate Bridge to the Richmond Bridge and then to Walnut Creek. The house was a mess. Kitchen drawers all pulled out, the TV cabinet had rolled into the middle of the family room, my jewelry box had spilled all over the floor, and dishes broken. We were all safe. I watched news all day for two days. Thank God we were all safe. 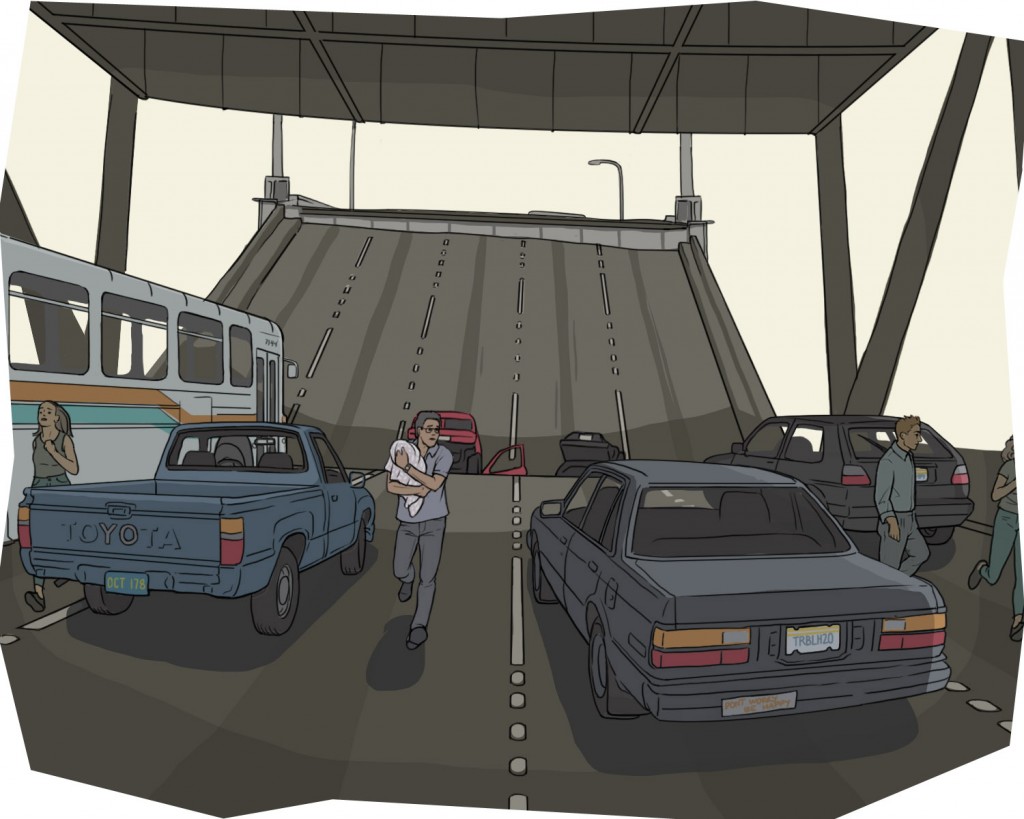