I was stationed as Inspector at Van Ness Station for rush-hour trouble-shooting that day. I was talking to the Station Agent when the earthquake hit. Both the Station Agent and I ran upstairs (thinking self-preservation!) to the street.

After the shaking settled down, I went back down to the Van Ness platform. There was no power to trains and only emergency lighting for station. Radio communication was dead. There was a 4-car outbound train on the platform. I was hoping power would return and things could continue on their merry way. Unfortunately, I came to the realization that it ain’t going to happen after maybe 10-15 minutes of waiting.

By then, I had heard rumors of the Bay Bridge being down (my mental picture was of the Bridge having collapsed into the Bay). With no radio communication with Central Control and with my mental picture of the Bridge being down, I also came to the realization that I was de facto chief-in-charge at Van Ness. With the apparent seriousness of the earthquake, I figured that I would have to make decisions on my own.

I told the Operators (in 1989, each car in the 4-car train had an Operator) of the train on the Van Ness platform to tell passengers that it was a major quake and that the subway system was dead. They would have to go topside to find another way home.

There was another 4-car train (with a jam-packed rush hour load) stuck part way between Van Ness and Duboce junction, where the J-N trains split off from the K-L-M mainline. I tried to roll the train in reverse direction back to Van Ness Station but was unsuccessful because the brakes would not release. I told the Operators to keep the passengers calm while I ran back upstairs to get flashlights and to get the Station Agent to help evacuate the train.

The Station Agent (James Odoms) and I returned to the train and posted Operators and passengers at points along the catwalk and along the trackway at tripping hazard locations (such as switches, motors, conduit, steps, railroad ties) and successfully got people to walk from the trapped train out to the Van Ness platform with no injuries (that I know of, anyway). People, amazingly enough, were cooperative and helpful to each other: it was amazing because people who work as Operators and Inspectors at MUNI see a lot of the dark side of people. This same phenomenon of people rising to the occasion and cooperating in a crisis was repeated consistently during the days after the earthquake. Yes, the world CAN be a better place!

Aside from the evacuation described above, I’m sure that many Operators had to do evacuations of their trapped trains on their own with no assistance. At least I was lucky enough to pony up some flashlights from the Station Agent for my incident!

MUNI Inspectors and shop personnel stayed on duty until 2- 3 AM to clear the subway of trains whose brakes had locked up due to loss of electricity and to inspect the full length of the subway. I remember walking through the subway with Inspector Clyde Sanders from West Portal all the way to downtown, checking for damage to trackway and electrical overhead.

We were somewhere between Van Ness and Church Street stations. The train’s power went out but the backup lights stayed on and we rolled to a stop. It was hot. I was on my way home from work to catch the game. No one on the MUNI, including the driver, had a clue what had happened. We didn’t feel the earthquake. It was over an hour before the driver let us know that there had been an earthquake and another hour before they were able to walk us out of there. No one had a flashlight. Not even the driver.

The driver opened the doors because it was so hot and stuffy. But every once in a while he decided to close them again. Some people stood out on the walkway.

We exited at the Church Street station and I saw the column of smoke over the Marina. Windows along Market Street were broken.

On the evening of Oct 17, 1989, I was a 16 year old senior at Lick-Wilmerding High School. When the earthquake hit, I was on the 54 Felton on my way home after a late day at school (why I was going home at 5, I don’t remember). It was a normal day, except abnormally hot as we all know, except about 2 minutes after we crossed Mission (on Persia), while at a stop, someone started trying to tip the old bus over. Or so we thought. It was a strange experience – those old diesel buses were not exactly lightweight… When I looked up (during the shaking) I saw “standing waves” in the electricity lines above. I knew it was an earthquake.

The bus continued on the route – I don’t think we knew the magnitude of what had happened. It was clear, as we continued on, that it was a serious event, however. Driving through a part of town with 2 story stucco-d houses with garages on the first floor, we could see big cracks in the stucco around almost every garage. 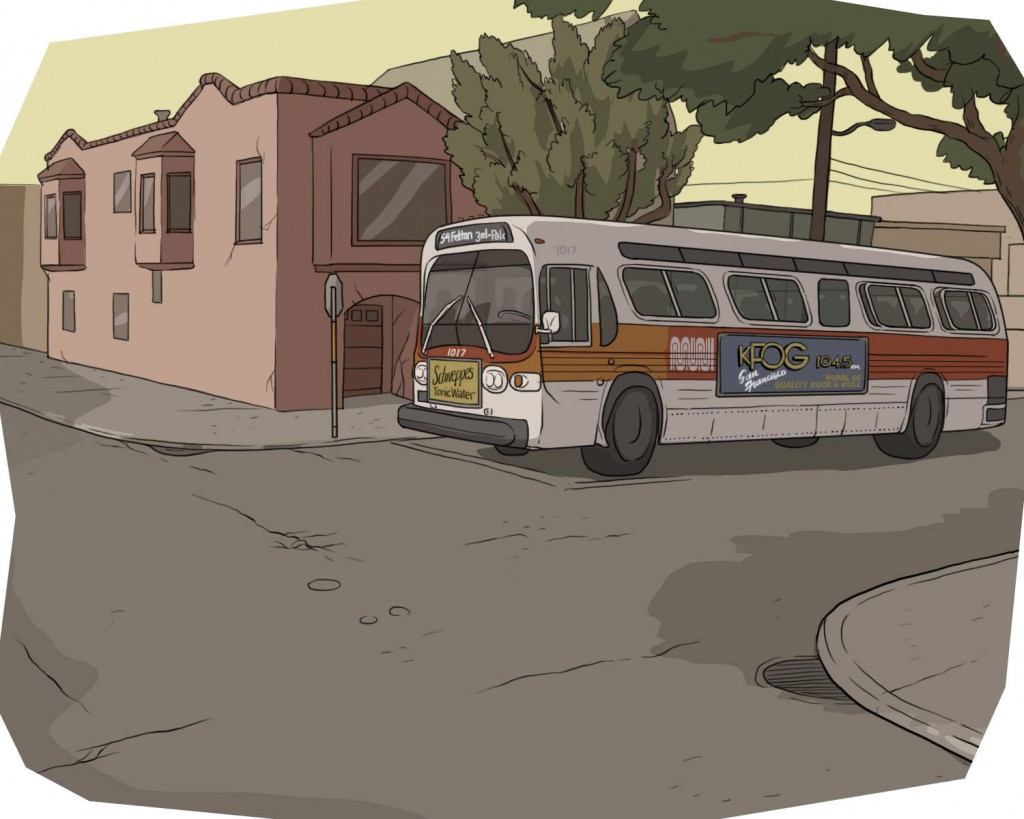 It was *really* hot when I got home, and my parents and my grandfather (visiting from Bakersfield) were at Candlestick for game 1 of the World Series – it was a strange day, earthquake or not.

No major damage (though I distinctly remember a shelf speaker had fallen neatly in a garbage can – of all the random memories I have). So here I was, an only child, experiencing the earthquake (and more importantly, the big aftershocks by myself) while my family was stuck at Candlestick. This was before cell phones – so I had no idea what was going on. You couldn’t even make an outbound call without waiting 30 seconds for a dial-tone. The power was out, people came out on the street (which, for my neighborhood, was extremely rare). But strangely I wasn’t scared. I was in a 6 hour adrenaline rush that night..

We were lucky – by the next morning, the power was on, no interruption in water or gas service, etc. I spent the next couple of days hanging out with friends surveying the damage (school had been cancelled for a few days). I remember going to the Marina and trying to get on the national news reports by walking back and forth behind the live reporters, because thats what teenagers would do, of course.

Everything was exciting – it was probably a great time in my life to experience this – as a teenager, with relatively few concerns, but old enough to realize the magnitude of what happened, and the appreciate that I had lived through something historic, and survived. To this day, I still feel an adrenaline rush every time a truck rolls by and shakes the street… and yet I still slack on the earthquake prep kit. DOH!

I was working a temp job on the 12th floor of a downtown office on Spear Street, and had just gotten off work. I caught the 14 Mission bus to go to the café on Valencia Street where my sister worked, but accidentally boarded the express one, which was headed towards Daly City. I couldn’t get off before the freeway so I was standing in the crowded bus, holding the rail over my head, looking out the window and lamenting how much longer it was going to take me to get home.

We were stopped, waiting for a light, and then the bus kind of rolled and it sounded like metal on metal, I figured we were having an accident on the side I couldn’t see. It seemed like a car was scraping against the bus. But then I could also see a guy who had been asleep in his car– he woke up and was all startled. I was wondering about the connection because his car wasn’t touching the bus, then people started saying “Earthquake”, “That was an earthquake!”

We sat there for a few minutes, then got on the freeway anyway, business as usual. I got off as soon as I could, in the way outer Mission. Around then, all the buses stopped running, so there was no way to get back. This was before cell phones, so I started walking to the Mission. As it happened, this guy I know, Dave Cohen, happened to be driving by and gave me a ride home. That was pretty lucky! That’s when I started to hear about how much damage there was.