I was working in the garage on the bottom floor of our dilapidated three-story apartment building on Oak St. between Schrader and Cole, at the end of the Panhandle. This is the acceleration spot for traffic coming out of Golden Gate Park heading east towards downtown, a continuous glide through the timed traffic lights. The wave of cars created its own breeze, usually circulating the cool foggy air, but on this day it was still and hot. So I had the door open while I worked inside my piano repair and electronic music shop at the back of dingy three cars-in-a-row capacity garage.

First car in was my ‘65 manual transmission Ford Econoline, the working piano-tuner’s vehicle that I used to navigate my SF neighborhood customers. Second car was the landlord’s brand-new Mercedes sedan draped in a car-cover, that was never moved and never driven. It represented his attitude towards all his property, especially the apartment building — leave everything exactly as you acquired it, never using it, so you’ll never need to maintain, much less repair it. Behind the Mercedes, my shop space began with a workbench made from a salvaged door covered with 1/8″ plywood, my drill-press and table-saw, and disassembled pianos in repair. Behind that, a makeshift drummer’s room, made from 2×4’s and sheetrock covered with green and yellowish carpet fragments. 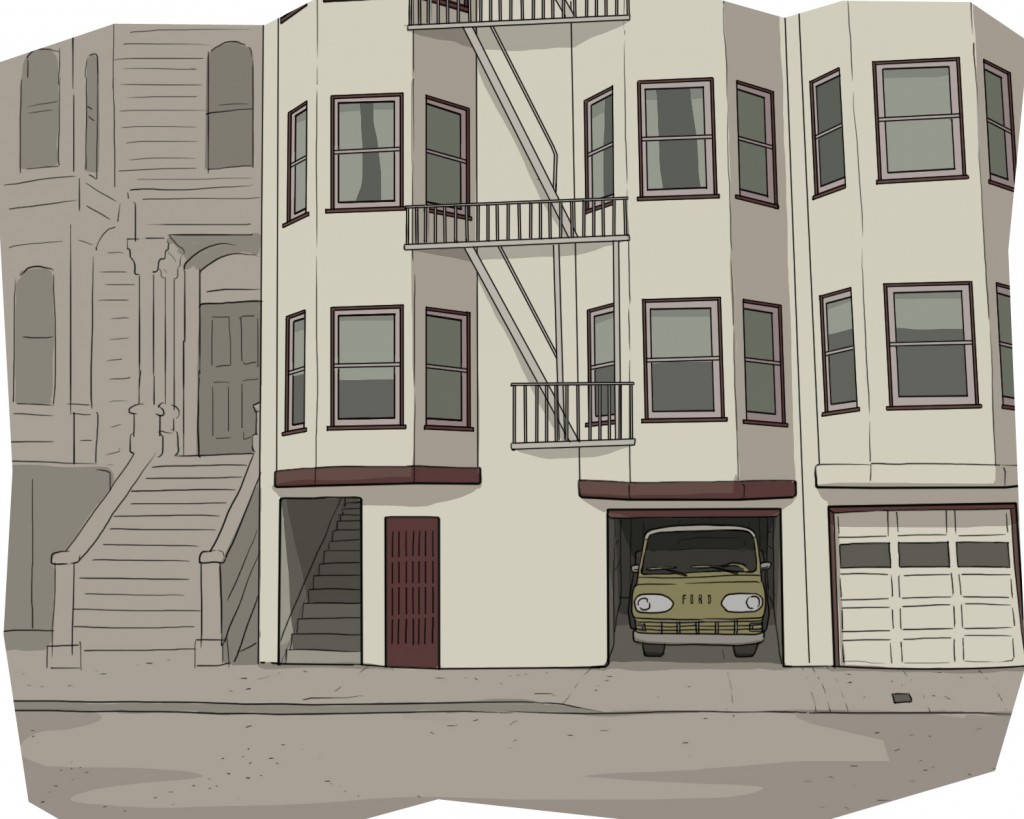 Its ceiling was about 7 feet, and the room itself about 10×18, packed with an upright piano, a small table for electronics construction and composing, small loudspeakers hanging from the walls, and an collection of homemade electroacoustic instruments made from stainless steel, plastics, recycled piano parts, and wood. A jury-rigged lampcord power system draped over the walls to a set of 3 bare incandescent bulbs and a single fluorescent light fixture. Behind the room was a narrow, lightless storage space, separated by a wall from the last part of the garage which contained the three water heaters for the building, and three more old water heaters that had been decommissioned, but never disposed of.

I was sitting at the electronics table soldering, enjoying the afternoon, when the quake hit. Suddenly the whole garage-tunnel was moving, even the walls were wobbling radically from side to side, like 15 degrees or so, and my general impression was that everything solid was becoming liquid. The lights went out and soot started raining down from the garage ceiling as I staggered first towards the doorway of the drummer’s room, then thought to myself quickly that if the apartment building collapsed, I would be dead meat in this dusty-old tomb. My little studio would be crushed like a matchbox.

My next flash of brilliance was to run towards the Mercedes to lie underneath it, because surely its German steel and Michellin tires would protect me better. As I lurched in that direction, the first quake subsided, and so I never got down on the dingy floor but kept going all the way out of the garage. There I realized that I was probably still in danger from things that might fall off the roof, as I stood in the very spot where 8 years before a roofer had fallen to his death on the sidewalk.

I ran quickly across Oak St. into the Panhandle where only the tough old eucalyptus trees might be dangerous. Dazed Haight-Ashbury residents started to join up on the grassy strip. The ground wasn’t moving, but alarms were starting to go off. A fire would soon begin between Shrader and Stanyan St., and I thought I’d hazard a trip up to my 2nd floor apartment to check for damage and turn off the gas.

I was up in the apartment when the first strong aftershock hit, but like riding a wave, I felt way safer with only one floor of the building above me. After it stopped I picked up the phone and was surprised to get a dial tone. I phoned my mother in Chicago and quickly told her I was ok.

After that, the phones went dead for a few days.