I was at Candlestick Park, field anchoring for the World Series, when the shaking started. When the masts on the news vans began to sway, we moved to a safe area and could see the concrete parking lot roll in waves like Jell-O. Then people started leaving the stadium in droves, everyone scared and anxious about loved ones.

Sports Anchor and great guy, Wayne Walker, came out to join our news crew and we broadcast from Candlestick when we were able to get a signal. The early reports coming in were often inaccurate, for example- we heard that the bay bridge had collapsed.

As it got dark, we drove back to the station- it was kind of surreal; quiet and dark with no streetlights and no one on the streets. Then, I joined Dave McElhatton on the update desk in the newsroom. Power was out, so the engineers used generators to get us on the air. I was sitting next to the sweetest man in television and we were both able to get ahold of our families to make sure all was okay. My daughters were in grade school- the five year old was at home with our sitter, my husband at the time picked up our eight year old from Hebrew school. Joe Fonzi joined us and talked about the scene inside the stadium. Once we knew our families were safe, we could really get to work. 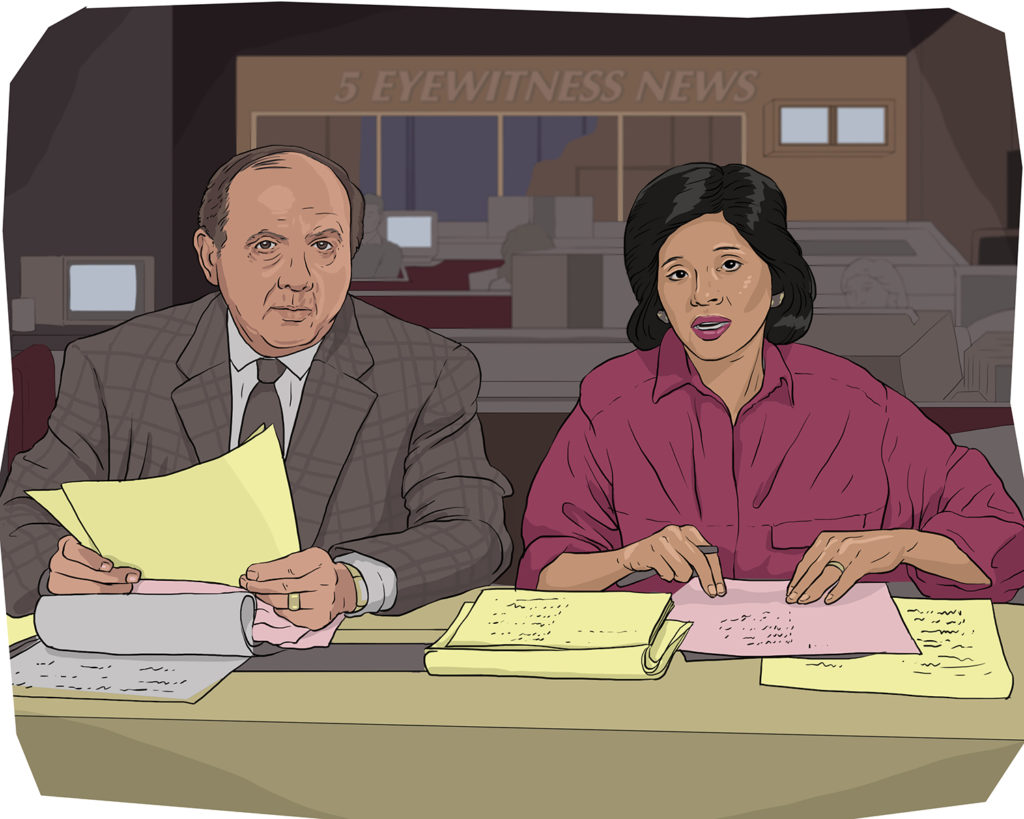 We were on the air into the wee hours, getting updates from fire and police, and phone calls from people all over the Bay Area telling us what was happening in their neighborhood. People were excited (not in a good way), scared, and often kind of in shock. Soon we were able to get a wider picture of the areas worst hit– the Marina, the Cypress, and Santa Cruz. It was a real lesson in the way earthquakes can work: liquefaction, unreinforced concrete = a problem, the more serious damage spread out in pockets across the bay area.

Kate Kelly and Loren Nancarrow took over, and one of our engineers who lived a couple of blocks away let me sleep on his couch. In the morning, I went back, wearing the same blouse I had stored at the station, because it was cotton and comfortable and like, who cares?

In the light of day, the damage was clearer and the story turned to the heroism of some, and the kindness of many. That was extraordinary- how people came together in the Bay Area in a way we’d never seen before.