As a Cal undergrad in 1989, I was 19 and working passionately, fervently and feverishly on a magazine I started by and about women of color. I got to campus at all hours on my pink, shimmery sleek gold bike, with a straightforward wire basket holding my bag, an over the shoulder tote, second hand, like the bike from Ashby Flea Market which cost $10. The only thing new was its bell. The bike got me from North Oakland to campus and my office at Eshleman Hall.

In those days, I dressed like a Persian carpet, thick corduroy patches, patterns mismatched and always like a bib on my chest, a big top hat with velvet flowers over long hair, and long skirts, gown-like and heavy or genie-like pants. The colors were all emerald green or ruby…and of course my uniform velvet or leather black. To ride to campus on my bike, I squeezed the bottoms of my skirt or pants, and tied them together like a scrunchy into itself.

At the time of the earthquake, I got to Bancroft, alongside cars on Telegraph, and I thought someone was tugging on my bike: I turned my head ready to say something, and no one was there. I looked up ahead of me and then got my boots down on the ground when I noticed the flagpoles on campus swaying super side-to-side, stretching so low almost to the ground. I knew then it was something extraordinary.

I was sitting at the computer desk in my office, working at a Macintosh IIcx.  (Hard to believe now, but the processor speed was only 16 MHz!).  The office was on the second floor of Evans Hall at UC Berkeley, in those days the primary location for campus computer center staff.  Evans Hall is a 10-story concrete monolith. 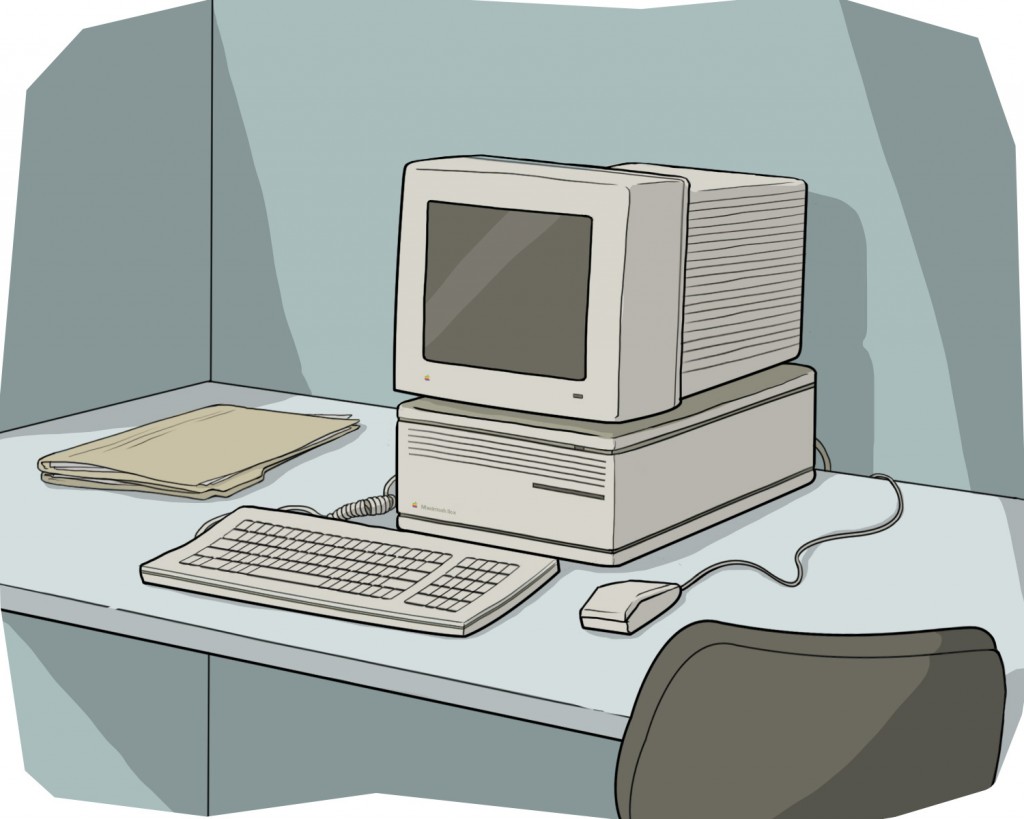 Just after 5:00 pm, the building suddenly jolted sideways.  It was a single, very sharp jolt.  I remained in my chair, hyper-alert for what might follow.  I turned toward my other desk and eyed the safe space below it.  But there was no further shaking. The power remained on.  I thought to myself, “That’s the strongest tremor I’ve ever felt.”  But I resumed work on the task at hand.

A few minutes later, having reached a good stopping point, I got up and went out into the corridor to chat with colleagues about the quake.  Quite a few people were on deck.  Some had heard alarming reports such as “the Bay Bridge fell down.”

Already a couple of colleagues had retrieved a TV set from a programmer’s lair and were setting it up in a corner office.  Soon we were watching the news.

As the scale of the disaster emerged, I knew I couldn’t to go home that night.  I arranged to stay with friends who lived in an Albany high-rise.  I also tried calling a neighbor in San Francisco but couldn’t get through because the phone system was overloaded.

I exchanged email with my niece on the East Coast, letting her know I was OK and asking her to inform my sister and others in the family.  My niece, a techie from an early age, was accustomed to sending Unix email on the Arpanet in the 1980s, as was I.

That night, like so many people, my friends and I sat transfixed in front of the TV set as shocking footage was shown over and over.

The next day I went to work.  The news seemed even worse, with reports of many deaths.   I tried to contact various friends.  I tried again to reach my neighbor, but couldn’t.  I had no idea what had happened to my apartment.  That night I stayed with my friends in Albany again.

Two days after the quake, I drove home to San Francisco via the Richmond and Golden Gate bridges.  As I passed near the Marina, my heart sped up as I remembered the images of collapsed apartments there.  My anxiety was reinforced by a disaster I had experienced in a different apartment building about five years earlier — an arson fire that had made all the tenants homeless one winter morning.

Reaching my building on Pierce St, north of Alamo Square Park, I was hugely relieved to find that it had suffered only minor damage.  In my own apartment, there were small cracks in a couple of walls, and some things had fallen off shelves.  A couple of bookcases had shifted several inches, but hadn’t fallen.  The only lasting damage was a triangular dent in the oak floor where a ceramic teapot had dropped six feet.  The minimal effect was a testament to our location, on bedrock.

Soon I confirmed that none of my friends were harmed either.  It was a bit surreal, that feeling of escape.

The neighbor I’d been trying to reach, who had been at home when the quake hit, gave me her report.  In her usual emphatic manner (blonde Italian from New Jersey), she said the building had vibrated like crazy.  No doubt the effect was amplified by the hundreds of tchotchkes in her apartment.